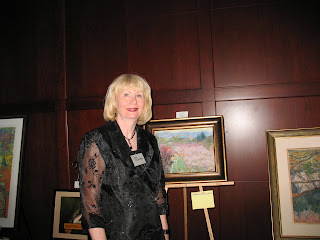 After the Rains: SOLD!

Sold! Both of my juried paintings have now gone to good homes. "After the Rains" sold prior to the reception and "Lost Maples" sold at the Inspire's on Fire: Emerging Artists Awards Reception last night at Valero's Gala. One of the gala's events included a Silent Auction while the Art was on display. With the band's music jamming the song "Celebrate Good Times," I noticed a reason to celebrate. My second painting had just been sold through the auction for my asking price. Yeah!

With my husband Paul and my Texas Pastel Society friends, Maria Lopez and Cathy Geib, we managed to have fun and collect accolades as well. The Pastel Medium came through with flying colors for well-deserved awards going to fellow-pastel artists, Maria and Cathy. Way to go, ladies! Gourmet appetizers, fine wines, and a great band also helped contribute to an unforgettable evening. Thank You, Inspire Fine Art Center! We're all looking forward to more good times and inspiration through you. 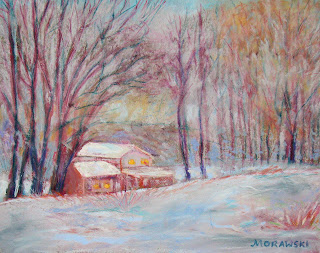 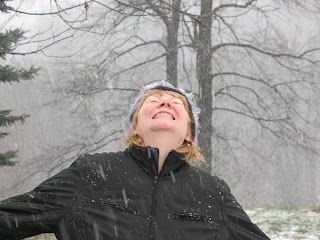 Joy! That's the feeling I had when I experienced my first moment of snow last Thanksgiving! It had been a long time since I'd even seen snow, and here I was feeling it on my face. The moment seemed to stretch into an eternity of slow-moving childhood memories of sled rides, snowball fights, and crisp, bright scenes from the past that came all in a rush of excitement. I grew up with snow in Pennsylvania. But now that I live nearer the equator in San Antonio, Texas, snow is a novelty and a treasure from my past. Since I was visiting my family for Thanksgiving in Ellwood City, PA in 2008, I expected turkey for our big meal, but what I didn't anticipate was a snowfall the day after the holiday. That was a gift!
In my recent painting entitled "Early Snow in Ellwood" I tried to capture the excitement of snow through the lingering warmth of a late autumn in reds and golds, the newness of snow through a diffused palette of light blues and lavenders, and the woodsy landscape from the western Pennsylvania countryside. My completed pastel painting is an 8x10 on pastelbord, and it will soon be listed and available through my online gallery: http://www.cindymorawski.com/.
The changing seasons never disappoint me. The chill in the air, the sudden quiet, and then the first snowflakes as they fall gently from the sky all add up to a delightful moment. Nature provides. See it with fresh eyes and enjoy!
PS: Please write and tell me about your adventures with snow.
--Cindy
Posted by Unknown at 8:22 AM No comments: 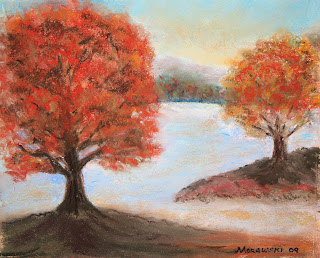 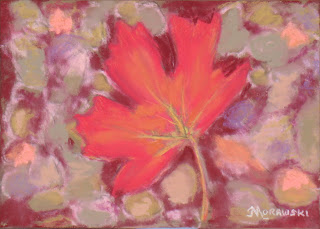 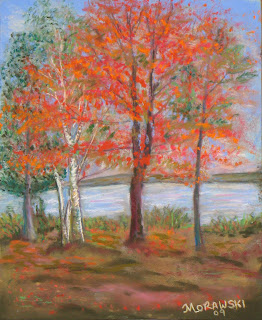 Imagine me as Odie, the dog character in the "Garfield" cartoon strip. Drooling, excitedly jumping up and down, very, very happy!! That's me when I think of AUTUMN. It has always been my favorite season and always will be. The cooler temperatures, the vivid tree foliage, the crunch of leaves, the promise of a harvest, and the sweet perfume of a change in the air-- all contribute to my love of Fall. The sheer cheerfulness of a Halloween pumpkin can make me feel like a kid again. Buying gold and claret colored mums for our home's entrance brings magic to my front door. Just the thought of all that trick-or-treat chocolate puts a shiver down my spine. With cooler weather, I can also plan a camping trip to Bastrop or a long hike at Lost Maples Park with Paul and my friends. Plus, although I don't consider myself a TV junkie, I can look forward to the new fall line-up and the end of summer reruns. Yes, the feeling of hope is triumphant for me.
Wanting to take advantage of that manic high I've got going, I can't wait to also get out my art supplies and get some painting started. Although Fall doesn't officially start until September 22nd this year, I wanted to get an early start with some new landscapes. I started in August with my tribute to Door County, Wisconsin, by painting "Joy of October" and "Door County." A couple of years ago, Paul and I visited family in Wisconsin in October. It was an unforgettable trip with lots of photos, food, hikes, and laughter. The natural beauty of Door County took my breath away. The colorful woods, the misty lakes and wetlands, and the small town festivals contributed to my falling in love all over again with Autumn. I based my above paintings on photos I'd taken of scenes from the Northeastern Wisconsin landscapes I viewed and appreciated.
Joy of Autumn and Door County are 8 x 10 landscapes on Ampersand tinted Pastelbord. The still life of Hardwood's Lost and Found is a 5 x 7 on Pastelbord as well. All are ready to hang with completed complimentary matting and framing. Joy of Autumn is already sold, but the others are price-listed online and ready for purchase. So, even if you're not a complete and utter fool for Fall like me, I hope you have a good Autumn. And, if you are from San Antonio, you all deserve some cooler and wetter weather this season!
I'll leave you with an excerpt from Robert Frost in his verse entitled "October."
O hushed October morning mild,
Thy leaves have ripened to the fall;
Tomorrow's wind, if it be wild,
Should waste them all. . .
Release one leaf at break of day,
At noon release another leaf;
One from our trees, one far away.
Enchant the land with
amethyst,
Slow, slow!
AUTUMN GREETINGS and GOOD WISHES!! --Cindy
Posted by Unknown at 8:07 AM No comments:

Finding my Roots at the North Antrim Coast of Ireland 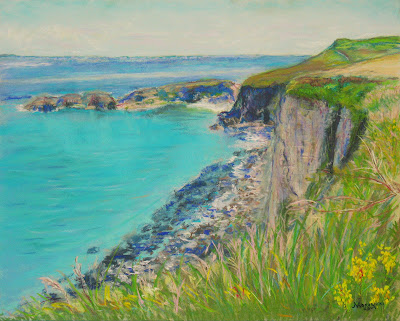 I am a blend of cultures. First of all, I am an American. I was born and raised in the United States so I am a product of the American culture. When I lived in England for three years while teaching English at a DOD school and I traveled through Europe, I was rarely mistaken for anything other than an American. My British friends told me that they could tell I was an American at least 5oo yards away. I had that cheerful, open look about me. I dressed in brighter colors and had a more casual appearance than most of my UK neighbors. I talked louder and laughed more than a lot of the natives. It was obvious that I was an American. Second, I am a Scotch Irish descendant. I have known that I was Irish since I was a little girl. I remember an Irish great aunt grabbing my cheeks and pinching them. Hey! A little too hard. And then exclaiming, "Aren't you a wee one!" Relatives visiting our farm when I was a child would be speaking English, but they sounded different. Sometimes I could barely understand them due to their thick Irish brogue. They reminded me of the leprechauns on the TV commericials for Lucky Charms. I found it endearing. I began to notice my roots. I took comfort in the fact that I belonged to a large tribe that had migrated to America, but was still out there in the Old Country. I knew that someday I wanted to go to Ireland and look back over the sea to America and consider my beginnings. Well, it took awhile, but finally I did it! At age 54, I flew to Belfast, Ireland with my cousins, rented a car, and headed north to the Antrim Coast. After stretching my legs from the car drive, I slowly headed toward the coastline cliff. Drawn like a lemming to the edge, I parted the tall grass and peered out at the ocean. Although, unlike a lemming, fortunately I didn't take a leap, but I did stand there for awhile and reflect on the natural beauty of my surroundings and then considered the wonder and mystery of "who" I was. I felt a pull like the ocean's undertow. It was a full circle moment for me. Feeling a lump in my throat and the tears pooling in my eyes, I sent out a quiet message of gratitude to all my Irish family, both past and present. I am a blend of cultures and now I think I understand.

The above pastel painting is a tribute to Ireland, and it's entitled "Finding my Roots at the North Antrim Coast of Ireland." (Oh, my, I know, a long title!) It's painted on a 16 x 20 Ampersand Pastelbord with soft pastels. Plus, I framed it in a wide, gold gallery-style frame for hanging. It's online price is $250. And, if you happen to be Irish, I'll give you a 10% discount. Although, unless you're family, I might need a little convincing! I painted this in my studio from a series of photographs that I'd taken from my trip two years ago. This is the painting I have wanted to do from the start, but put it off. I wanted to get it right. I like the bold turquoise, the soft greens, and the texture of the cliff and rocks. I'm glad I have a product of this journey. It's a reminder of something I value. Whether or not you're Irish, I hope you'll consider purchasing this painting for your home.