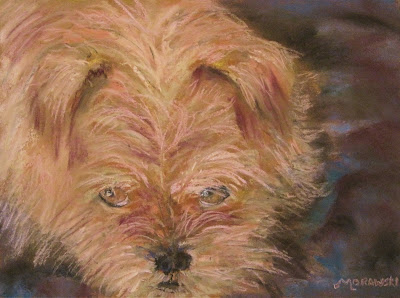 "Forgiven"
Painting by Cindy Morawski
When I look into my dog's eyes, I see a reflection of myself. I immediately know whether I have been fair to him or not. I know whether I've been forgiven for misdeeds or not. You see, my adopted dog Rusty came my way as an abandoned pet, one that I rescued before he ended up at the pound or worse. He's been down and out; I sometimes can see his disappointments in humans who he so desperately wants only to trust. I want to give him a good life. One that he failed to have from the beginning.
He arrived a broken dog last summer in early June. He was thin, dirty, and flea-bitten. I originally named him Dusty because of his dirty appearance. However, when I gave him a bath that all changed. I noticed he actually had a reddish-cast to this coat. He seemed reborn like a Phoenix. So, he became Rusty instead of Dusty. My dog had no ID and no history. Oh, I wish he could have talked; it would have made it so much easier. I did all the usual things such as checking to see if he had a microchip ID at the vet's office, and I put signs up with his picture in the neighborhood and at local vet clinics. But, he didn't seem to have anyone who was willing to claim him. Since I had recently lost a dog to cancer, I was still in the process of grieving and didn't think I could start anew with another pet. But that all changed when I looked into his eyes. I understood that he was giving humans a second chance. He reached out with those expressive eyes, he licked my hand, and the deal was sealed. He belonged to me. All was "forgiven."
This pastel painting was done on Art Spectrum sanded paper and the image measures 9 x 12. It's double matted and framed as well, ready to hang. I asked Rusty to pose for me in the studio, but he didn't exactly cooperate so I used photos to get started. He's resting on his favorite soft blanket. I sketched in his likeness, and then put on the layers of pigment to bring out the color values. With each step of the painting process, I hoped to set a mood and tell a story. My dog is important to me; I wanted to get it right.
This painting can be seen in my online gallery (http://www.cindymorawski.com/), and it's available as an original and in prints. Please consider visiting Mockingbird Studio and my home's gallery soon. Some of my work is currently on sale with 15 and 20 % discounts. I also am available for commissioned pet portraits. If you have a pet that you'd like to have painted, please contact me for more details.
Hope you'll consider adopting an animal if it's within your means. It could enrich your life and save the life of a cat or dog who has been abandoned or neglected. One simple choice could make that difference.
~~~Cindy
Posted by Unknown at 8:46 AM 1 comment:

Email ThisBlogThis!Share to TwitterShare to FacebookShare to Pinterest
Labels: Portrait Painting of a Pet Dog 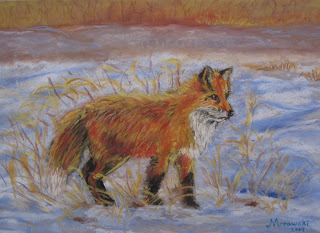 Going home to his den after a long, cold night's hunt in search of dinner, a fox is not much different than me so to speak. I can relate to the struggle, the longing, and the journey. Most of us have to make concessions in order to survive. The fox is my metaphor for all of that in this painting entitled "Going Home."

The life of a fox also parallels a human's life. Foxes live in family groups while the young are growing up. At other times, they live alone or in pairs. They play together and cooperate while hunting. Foxes cover for each other too. If one of a pair of foxes is chased by an enemy, its mate may dash out of a hiding place and lead the pursuers astray. These bushy-tailed members of the dog family also communicate with one another. Growls, yelps, and short yapping barks all contribute to a foxy-type language.

In reference to my painting, I modeled the fox from photos taken. The landscape was a cold one that I'd imagined from the chilly month of January from the northern part of the United States. I painted Mr. Fox on sanded Wallis paper with hard, medium, and soft pastels. This art work is also already framed in beautiful dark cherry wood. Please inquire if you would like to know more about this painting. It is ready for purchase and also available in a 12 x 16 print that can be matted and framed.

After record-hitting days last summer going over 100 degrees, it's hard to believe that San Antonio's weather will dip down tonight to a low of 16 degrees above zero. Hope all of you stay warm! Plus, Happy 2010!! Hope your New Year finds you happy and healthy!