Looking for Paradise in a Place Called Utopia 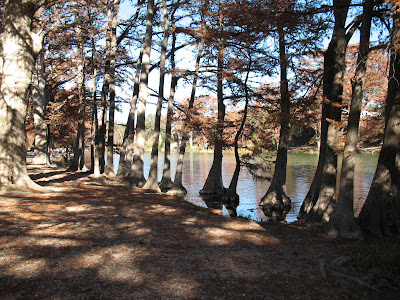 Walking through the Cool Shadows 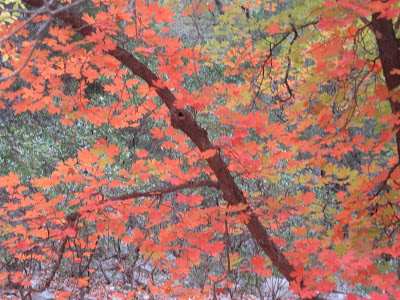 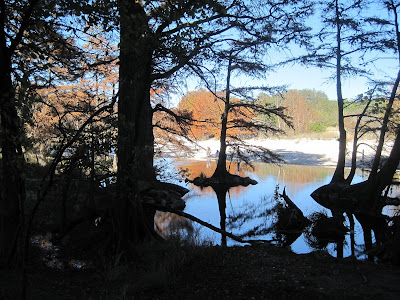 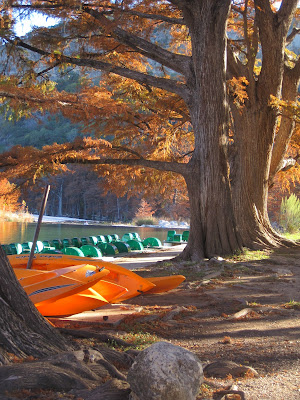 Ready for a Boat Ride 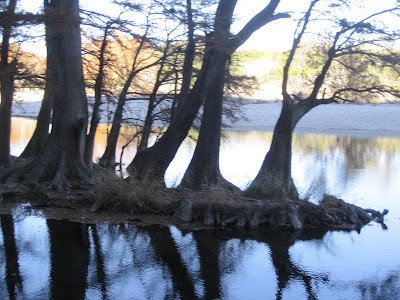 Late Afternoon along the Frio 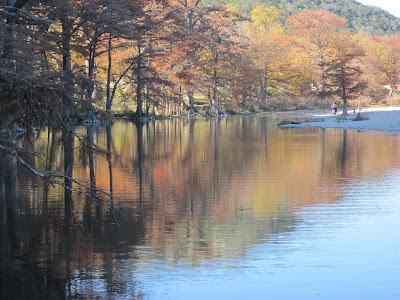 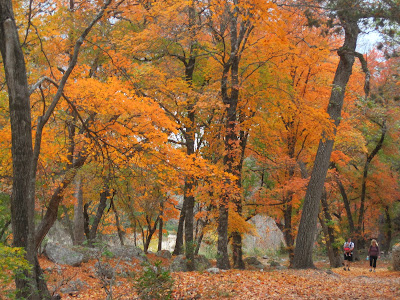 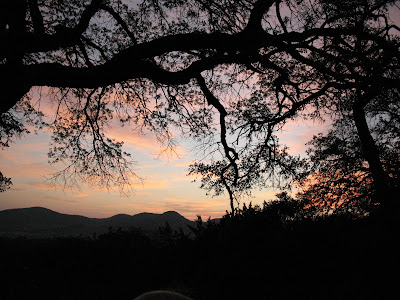 Sun Going Down at the Bunkhouse
Thankful for Utopia
by Cindy Morawski
Thankful.  That's gratitude for you.  I found myself thinking about how I wanted to spend some of my free time the week of Thanksgiving, months ago.  I felt thankful that Paul and I were going to get some time off so we discussed the possibility of a little vacation that wouldn't involve airfare, rental cars, or dining out two or three times a day.  We also wanted to take the dogs with us.  We hoped that we could involve some of our friends and family too.  Hmmmmmm.
The answer came to me as I was remembering how much fun I'd had when I went to Lost Maples for an art workshop last April.  I'd stayed at the Fox Fire Cabins and had a great time.  Paul "googled" the cabins and I talked to the office manager.  They informed us that there was a cabin called the Starry Night Bunkhouse outside Utopia, and that it would be available when we wanted to get-away.  We jumped on it because we could take the dogs.  We hoped that we could hike the trails of Lost Maples and Garner Parks because November had cooler temps.  We kept our fingers crossed that the trees would have changed and looked more like fall than summer.
We drove through Helotes on Bandera Road and followed Hwy 16 all the way to Bandera.  From Bandera, we then traveled through Medina, the apple capitol of the Hill Country, and then on to Vanderpool and Utopia.  If the pretty drive there was any indicator of a good time, then we suspected we'd have it made.  The hilly twists and turns and subtle shades of autumn tree colors clued us in.  The Texas Hill Country is its own piece of Paradise.
We finally ended the drive at Lost Maples.  We were going to kick off our time-off by hiking with our friends Marie and Garth.  The trees didn't disappoint us.  Brilliant hues of oranges, yellows, and reds danced in the maples and other trees along our trail.  Chatting and laughing together, we ambled on.  The possiblities seemed endless.  It was all good.
Later we checked into our cabin in Utopia.  The hilltop view was magnificent.  Everything tasted better during our stay while we ate outdoors.  Coffee and sunrises.  Dinner and sunsets.  The air seemed lighter and healthier than our usual city atmosphere.  The burn ban had also been lifted so we had a chance to build a fire and roast hot dogs and marshmallows over the open flames.  It seemed like a long time since we had a camp fire.  Our extended drought had kept that from happening.
The next day we had a chance to hike with our family; Ryan and Tonia and the grandkids met us at the park, and Phineas and Rusty, our dogs, accompanied us too.  The morning felt cool and crisp.  The air smelled of autumn leaves with a hint of smoke from campfires.  The dogs pulled at their leashes.  We headed down the Maple Trail together.  Endless.  That's the word that came to mind again as I sauntered down the path.  I wanted the day to never end.  It was that good.
Utopia was our resting place each night.  We headed back to the cabin after our day outdoors while hiking and picnicking at Lost Maples and Garner State Parks.  We cooked and slept in the bunkhouse.  Sleep seemed better after a day of exercise and fresh air.  The stars looked brighter out there too.  No city lights to fade the night-time view.
Paradise can mean many things to many people.  To me, I found my little piece of paradise in a place called Utopia.  I remain thankful for that.
Hope you had a good Thanksgiving!
~~Cindy﻿
﻿
﻿
﻿
Posted by Unknown at 8:01 PM No comments:

Finding COMFORT in a small town outside San Antonio

HOLIDAY WELCOME!
Posted by Unknown at 8:43 AM No comments:


If you'd like to see my Holiday Gift Line-up of Mag-Cats (Cat Magnets), paintings, cards, prints, and gift bags, please consider joining me at the FALL Festival at Zion Lutheran Church this Saturday, November 5th, 2011, from 10 to 4.  It's located at 1604 and Braun Road.  There will be many artists and crafts artisans, plus a snack bar.  Holiday Gift ideas and shopping will be ready for you this Saturday!  Hope you'll mark your calendar!

WELCOME FALL!
~~Cindy
www.cindymorawski.com
Posted by Unknown at 10:14 AM No comments: